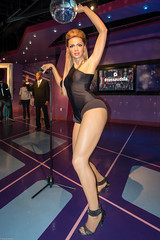 Jessica Biel has never been shy about revealing her secrets for keeping her toned bod. But after giving birth to son Silas Randall Timberlake, she's more concerned with educating women about what's going on INSIDE their bodies!

After deciding to have a child two years ago, the 33-year-old recalled how little she knew on the subject of pregnancy. She said:

"Now what happens? I've been on the Pill for so long; how hard will it be to get pregnant? Suddenly I realized I really didn't know what's going on inside my own body. It was shocking."

But pregnancy isn't the only topic Biel and Pelletier are covering. The video series will cover "everything from puberty to contraception!"

Biel wants to teach girls not to feel "ashamed" of their bodies, as she remembers her own embarrassing memories in fifth grade when she got her period. She recalled:

"I was in a school play, wearing a gray beard and this pad the size of a skateboard and thinking, What is happening to me? We want girls to know what their [body is going through] so they don't feel scared or ashamed or gross."

While the videos plan to "share girl stories, fears, and insecurities," the new mom says not to expect just another corny sex-ed class. She adds:

"The tone is informative but also goofy, smart, witty."

We think it's wonderful that the actress is so passionate about educating girls about their bodies! You can watch the videos on WomanCare's website HERE!

Lady Antebellum's Charles Kelley and his wife Cassie McConnell Kelley prove you should never give up hope.

As we reported earlier this month, the couple announced they were expecting their first child after years of struggling.

On Friday, Miz Kelley went on Good Morning America to openly discuss the battle she and her husband faced trying to get pregnant.

[ Related: Lady Antebellum Is Taking Some Time Off! ]

"I get choked up just thinking about it… We're thankful — blessed isn't a strong enough word. We were up against some incredible odds, and it still happened."

When the country star and his longtime girlfriend got married in 2009, they never expected having their first baby would be such an arduous task.

"I think when you're young, healthy and you're ready to start a family, you just don't envision there will be any problems doing that."

However, they soon realized the realities of their situation.

"My body doesn't ovulate regularly [called anovulation], which is problem number one. I also had a blockage in my Fallopian tube, which also happened to be connected to my dominant ovary."

Doctors even told the 33-year-old and the 32-year-old they had a 1 percent chance of conceiving naturally.

However, one day, their dream came true.

"The plan was to start IVF, but to our surprise and incredible excitement, I got pregnant in May and then found out we were expecting in June."

And get this… she not only knows her due date, but also the sex of their bundle of joy!

"I'm due in February, and we just found out that we're having a boy."

We are so incredibly happy for Charles and Cassie, and we applaud them for honestly sharing their story!