A lot has changed since Jennifer Love Hewitt first bared her baby belly during her photo shoot as the face of Palmer’s Cocoa Butter’s fall line.

The actress and husband Brian Hallisay have since welcomed their second child, son Atticus James, a sibling for 21-month-old daughter Autumn James.

And as the mom of two — who’s still nanny-free for now! — settles into her new life, Hewitt’s ad for the brand has officially launched.

In honor of the debut, Hewitt, 36, spoke to PEOPLE about everything from her favorite products from the line to how she chose her son’s name and whether the couple plan on trying for a third child. 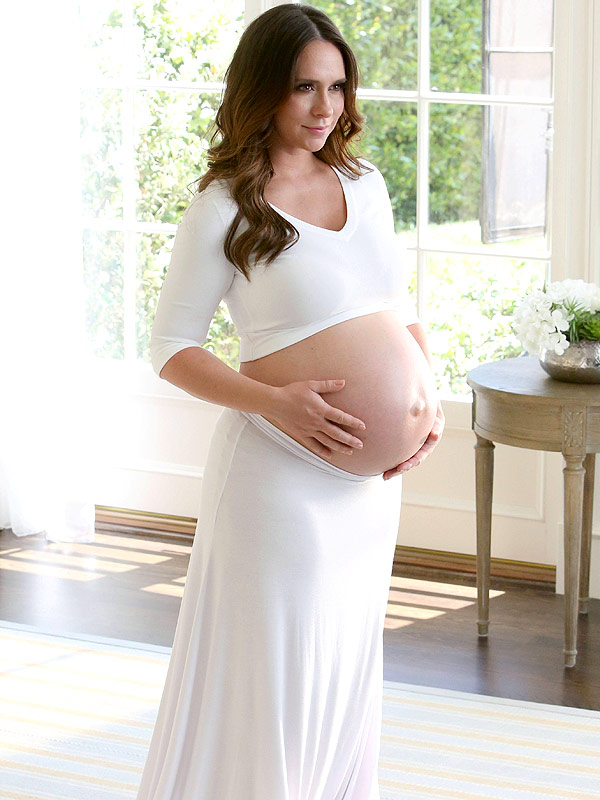 PEOPLE: Congratulations on your new baby boy! How has life been adjusting to being a mom of two under two?

Jennifer: Let’s just say it’s crazy and beautiful. Every day brings something new and surprising and exciting. I wouldn’t trade any of it for the world.

PEOPLE: What’s your mommy must-have from Palmer’s pregnancy line and why?

PEOPLE: How is Autumn adjusting to her new baby brother? Is she already loving being a big sister?

Jennifer: She is in love with him and kisses him most of the day. Her favorite part of the day is snuggling with him. It’s so gratifying to see them developing such a strong bond. My brother has always been an important part of my life and I’m so glad they will always have each other, too. 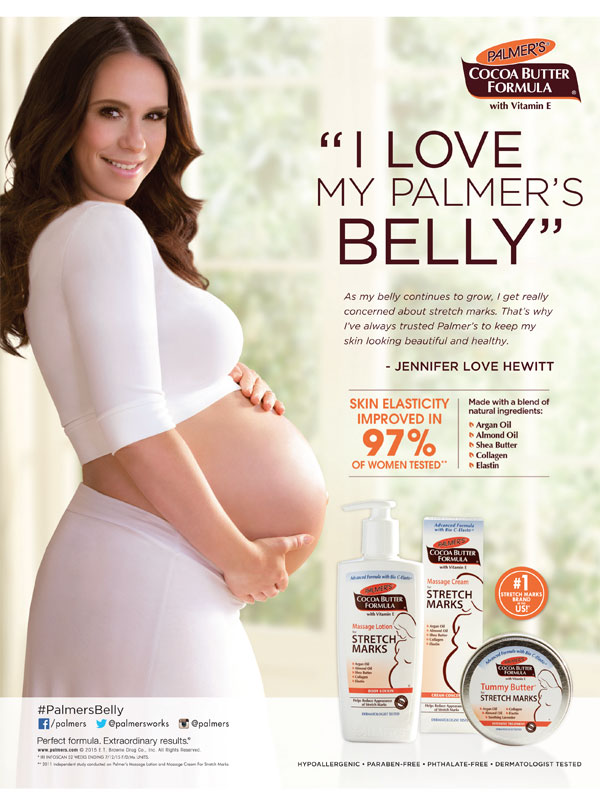 PEOPLE: How did you decide on the name Atticus? Is there a special reason why both kids have the same middle name?

Jennifer: We both thought Atticus was a strong name. Autumn and Atticus both have the middle name James, after Brian’s grandfather. We thought it would be cute for them to share the same initials and middle name.

PEOPLE: We saw your tweets about a scarf saving the day when you leaked during a meeting! How is breastfeeding going?

Jennifer: So far, so good. It’s something I have felt really fortunate to be able to do with both of my children.

PEOPLE: You’ve said Brian was an amazing coach during your daughter’s birth — was he the same way during your son’s delivery?

Jennifer: He was great again. I couldn’t ask for someone more supportive and loving to experience such a momentous event with me.

PEOPLE: Do you feel like your family is complete or are you and Brian hoping for a third?

Jennifer: Having two healthy pregnancies and two healthy babies has been a blessing. You never know …

Jennifer Love Hewitt Has Given Birth To A Baby Boy!

Jennifer Love Hewitt has given birth!!!

The 36-year-old actress and husband Brian Hallisay announced that they welcomed a baby boy into the world.

So what name did they go with for their second kid???

We bet Autumn James is gonna love having a little brother. 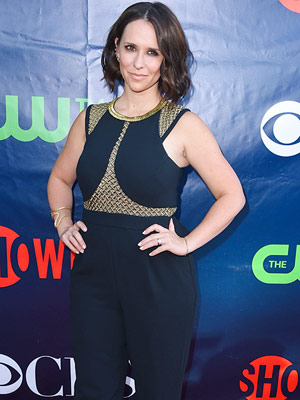 Thirteen months after welcoming their first child, now 18-month-old daughter Autumn James, the couple announced they were expecting another baby — and delivery surprise — together.

“I feel my best when I’m pregnant, which means I probably should have 18 children — it won’t happen — but I do feel good,” Hewitt, 36, told American Baby in April.

Despite now having two under two, Hewitt, who was named the face of Palmer’s pregnancy products, and Hallisay, 36, aren’t fazed by the hard work ahead.

“We didn’t have a night nurse, we didn’t have a nanny,” the former Criminal Minds star told PEOPLE in May. “We haven’t ever had any of that stuff. It’s been really interesting to do it all ourselves.”


E! was first to report the news.

It’s no secret that Hollywood parents are often armed with an entourage of help at their disposal, but Jennifer Love Hewitt is bucking the trend when it comes to her daughter and baby on the way.

“We didn’t have a night nurse, we didn’t have a nanny,” the mom of Autumn James, 18 months, with husband Brian Hallisay, 36, tells PEOPLE. “We haven’t ever had any of that stuff. It’s been really interesting to do it all ourselves.”

It hasn’t been smooth sailing every step of the way, but Hewitt, 36, says she’s learned to prioritize.

“I think [as a mom] you just realize how unimportant stuff is,” she says. “Everything before you have kids is oh-so important and then you have kids and you’re like, ‘That really doesn’t mean anything. My kid is healthy, there’s no sniffles, they’re sleeping, life is good!’ It really puts that into perspective.”

Life is about to get even better. Hewitt, the face of Palmer’s line of pregnancy products, will welcome her second child in June.

“I’m really curious to see how similar [the two kids] will be,” says Hewitt. “And I’m looking forward to having two little tiny people to snuggle with! It’s just my favorite thing ever.”

Although the couple have chosen to keep the sex a delivery surprise again — a decision that “drives family and friends crazy,” Hewitt admits — Hallisay has his bets on another baby girl.

“He’s of the mindset that he’s going to have all girls. That’s what he’s preparing for and he’s very close with his mom and sister so he’s fine with that,” the mom-to-be explains. “I think he would be more shocked if it was a boy, but he’s prepared either way. He’s excited.”

For more from Jennifer Love Hewitt, pick up the new issue of PEOPLE, on stands Friday.

She’s got the glow!

Jennifer Love Hewitt shows off her growing baby belly while promoting Palmer’s Cocoa Butter Formula stretch-mark products during a photo shoot as the face of the brand’s fall 2015 line.

In the stunning shots, the actress, 36 — who is expecting her second child with husband Brian Hallisay in June — sports a white crop top and flowing skirt as she cradles her bare bump.

Hewitt’s willingness to be a part of the Palmer’s line comes from her own personal experience: The mom-to-be used the products while pregnant with daughter Autumn James, now 17 months.

“After the success I had using Palmer’s through my first pregnancy, I knew I wanted to support the brand by baring my pregnant belly to celebrate the beauty of expectant mothers,” Hewitt says.

“These are products that I believe in and actually use — they help moms to embrace the natural glow of pregnancy, and I find it so empowering to be able to show my pregnancy off in this way.”

Hewitt, who just announced that she will not be retuning to Criminal Minds, recently spoke about the sense of freedom that comes along with her pregnancies.

“I feel my best when I’m pregnant, which means I should probably have 18 children — it won’t happen — but I do feel good,” she told American Baby.

“Your body changes so much and there’s a sensuality about that. I say, accentuate the fact that your legs look thinner than they ever have and your boobs look great. Work it!”

Hewitt joins a long list of celeb mamas-to-be who have bared their bellies in support of Palmer’s Cocoa Butter. Ali Landry, Laila Ali and Angie Everhart have all been involved with the brand while pregnant. 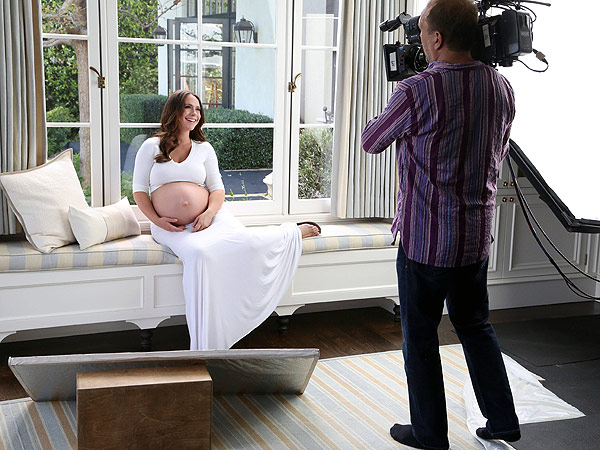