Celebs in the Hood 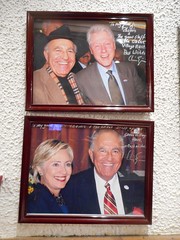 Back in the day

Washington Police arrested five people on Friday after undercover detectives busted employees for selling cocaine and other drugs out of a Papa John's Pizza.

According to local news affiliate KIRO-7, authorities in Sammamish, a neighboring Seattle city, received a tip that employees were selling drugs out of the restaurant parking lot, which launched a six month investigation cops dubbed "Operation Extra Olives."

This code name arose from the passcode the detectives -- posing as customers -- would ask to get some kind of drugs from employees.

Each time they ordered a pizza at the Papa John's location, officials asked employees to "give it extra olives," and promptly received a pizza box full of cocaine!

"What the detectives would do is they'd order pizza and go out and wait in the parking lot. The employee would bring the pizza out and in the box would be the cocaine."

Detectives were able to buy drugs from two different employees -- one of which introduced them to other local drug dealers in the Sammamish and nearby Bellevue.

Multiple law enforcement agencies conducted search and arrest warrants on Friday morning at the location, where they found employees had stashed drugs in the cash register, sinks, and soap dispensers.

Officials recovered about $28,000 in cash, along with stocks of cocaine, ecstasy, marijuana, meth, acid, and Oxycodone.

Related: Chris Cornell Had Pills In System When He Took His Life

In addition to arresting the two Papa John's employees, police made three additional arrests on Friday. One of the busts took place in a crowded Bellevue house, where a 21-year-old and 26-year-old were taken into custody.

The popular restaurant chain revealed the two arrested employees are no longer with the company, and said the only delivery they condone is that of a delicious, handmade pizza -- saying in a statement:

"Papa John's has zero tolerance for this type of offensive and illegal behavior. The franchisee has confirmed that the employees involved with this situation are no longer employed and we apologize for their actions. The franchisee is working in full cooperation with local law enforcement to resolve this matter. Furthermore, food safety and sanitation is of the utmost importance to Papa John's. The franchisee took immediate action steps, with Health Department oversight, and the location was cleared to reopen."

It looks like Operation Extra Olives has come to a delicious close.

Taken behind the scenes during the production of the video teaser for the 2016 Gymkhana Grid finals in Greece.
gymkhanagrid.com/portfolio/grid-2016-five-weeks-to-go/

The Kardashians Have Arrived In Cuba! However, THIS Congresswoman Is NOT Happy About Their Visit!

Move over Barack Obama! The Kardashians are taking Cuba by storm!

As we reported, ever since the President lifted the ban, the reality TV family will visit the country and film it for KUWTK.

On Wednesday, the social media queens arrived on the Caribbean island and -- not surprisingly -- documented it on social media!

Khloé Kardashian posted the above pic of her, Kim Kardashian, Kourtney Kardashian, and BFF Malika Haqq with the caption:

In addition, the clan and Kanye West were spotted having dinner at San Cristobal Paladar restaurant in Havana. You can see that pic HERE.

Unfortunately, not everyone is excited about their visit. South Florida Congresswoman Ileana Ros-Lehtinen had gripes about their destination.

"I know it's cool for celebrities to go to Cuba, but the Cuban people don't experience the glamorous Havana that is featured on social media… Far from photo shoots and fruity drinks, everyday Cubans experience a different, sad reality… Now, the Kardashians are parachuting into the island to tape their vapid TV show… Haven't the Cuban people suffered enough?"

Oh well! You can't please everybody!

There are certain rules for family members. You don’t borrow money, and you don’t work together. You do anything to avoid tension with the people you can’t avoid.

But when you’ve grown up first generation in an Italian family, and you own a restaurant, all the rules go out the window.

For 40 years, my father has owned and operated a successful Italian restaurant in the Hudson Valley of New York state. For two-thirds of his life, he’s had the same schedule, the same workplace, and the same, ever-changing, entrepreneurial expectations.

Our Italian restaurant has employed a rotating cast of characters in our storied past, and 90% of them were complete strangers. But the backbone of the employees are family—aunts, uncles, cousins, daughters, wives. And for the last 24 years, since I was born, I’ve been along for the ride.

I’ve worked at my family’s restaurant since I was 12 years old and could help out bussing tables during the busy weekend shifts. For literally half my life, I’ve been working with my family, with various degrees of success. Here’s what I want you to know.

I owe my sense of family to the job

When I was a very young child, I hated that I never got to see my dad because he left early and came home late. So when I was old enough to hold two plates on one hand, I begged to be able to work so that I could always be around my dad.

I also joined my two older sisters in the ranks of busgirl/server, my four cousins, three aunts, and an uncle, as well as my father. Because we spent so much time together working, I got to grow up constantly with my family. My father encouraged us to work so that he didn’t miss out on time with his family, which was a huge priority for him.

Work was what brought us together. Now I’m extremely close to my family, whether it’s immediate or my extended second-cousin thread, and I owe those relationships entirely to my time working in our family restaurant.

There will always be fights

The common wisdom is that you shouldn’t work with your family, because they’ll end up driving you nuts and you’ll end up hating each other. But the reality is that even though those fights definitely will occur, they’re not always that catastrophic.

Working with your family is a challenge, because you can’t hate your co-workers if you’re family. Or, you can’t really show it. But you have to make a choice: would you rather work with strangers, or spend time working with people you love?

Your dad as a boss comes with certain perks

When I was a teenager, working on weekends gave me structure and discipline, but it also meant that I could take off much more easily than my friends could [...]