Suri Cruise Wants to Be a Model Now. I’m Sure She’ll Achieve It on Her Own Talent and Not Nepotism I’m 100% sure that when Suri Cruise gets to high school she’s going to be voted most likely to watch her parents get arrested for bribing a college official. We all see that coming, right? Well, Suri is only 13, but according to RadarOnline she’s ready to be a model.

With offers ahead, “Suri’s really excited — she’s very much a little performer.”

Oh, I’m sure she is. I’m sure that the reason everyone wants to sign Suri Cruise is because she’s a modelling prodigy. It’s absolutely not just because she has famous parents. In fact, having famous parents is a sign that you’ll also be good at anything; just look at how great an actress Sophia Coppola turned out to be and how good Edsel Ford was at having cars named after him.

But Suri’s mother, Katie Holmes, isn’t that keen on her teenage daughter growing up as a model.

“She was basically a child star herself, and isn’t sure if she wants Suri growing up in the industry,” the source explained of the former Dawson’s Creek teen star.

Her father doesn’t care what she does because she’s a suppressive person and he’s daddy Miscavige’s good boy. Gee, a teenage model with daddy issues. She’s going to grow up just fine and nothing like every character in one of Woody Allen’s films.

Why do modelling agencies even want to sign a 13-year-old? Is she going to be walking the runway with all the other 13-year-olds? Or are all the top agencies just really excited to represent the new face of Old Navy Kids?

I’m not 100% sure, but I believe that getting her 13-year-old daughter a lucrative modeling contract is essentially the reason Marie Antoinette got her head chopped off.

The post Suri Cruise Wants to Be a Model Now. I’m Sure She’ll Achieve It on Her Own Talent and Not Nepotism appeared first on The Blemish. 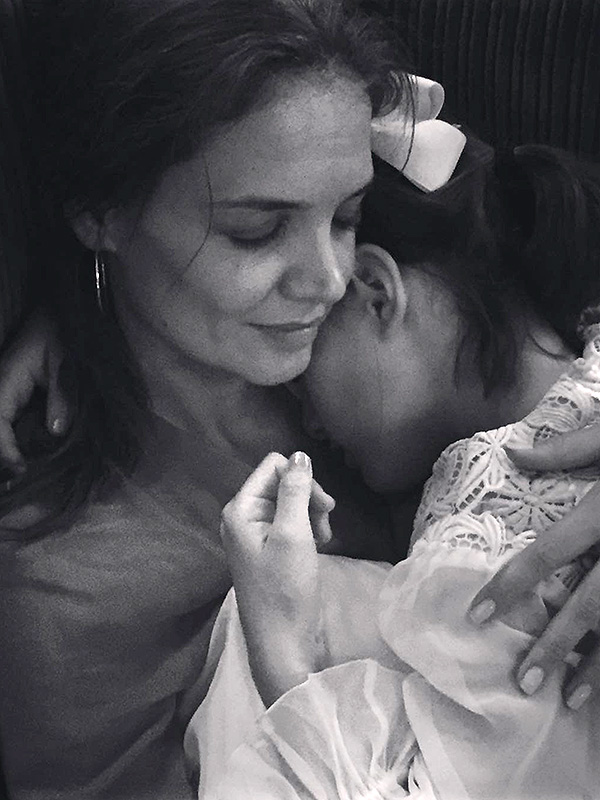 Katie Holmes is one grateful mom.

The actress, 37, shared several sweet photos taken at her mother Kathleen’s surprise birthday party on Sunday. In several photos, Holmes expresses her love and appreciation for her 10-year-old Suri Cruise.

In one post, Holmes snapped a shot of her daughter dancing in a white dress with a matching bow at the party. She captioned the black-and-white photo, “#happybirthdaymom #surprise #gratitude #family.” In another post from the festivities, Holmes is seated with a blissful smile on her face as she cuddles with her daughter and another little girl. And Holmes ended the series of adorable family photos with a particularly sweet moment between the mother-daughter duo.

“#blessed #goodnight #gratitude #happybirthdaymom #family #love,” she captioned the photo of Suri nuzzling up against her mom.

Holmes shares her daughter with ex-husband Tom Cruise. The couple were married in 2006 and Holmes filed for divorce in June 2012.

In a 2014 interview with PEOPLE, Holmes said Suri “means everything to me … I’m learning every day, and I have been since the minute I became a mom.”

Katie Holmes and Suri Cruise don’t want to grow up.

The actress took her 10-year-old daughter and mother, Kathleen, to a Broadway show for a girls’ night out in New York City on Saturday. The group headed to a performance of Finding Neverland, which tells the story of Peter Pan creator J.M. Barrie, before meeting the cast backstage.

Suri was beaming as they posed for a photo with the costumed actors, including a dancer who portrays Peter Pan. The daughter of Tom Cruise wore a cute yellow and white daisy-patterned dress paired with a glittery bow headband.

Holmes, 37, donned a chic casual look, pairing a simple skirt and shirt with a camel-colored hat.

Alongside the show, the girls’ weekend included a trip to famous N.Y.C. dessert hotspot Serendipity 3.

“We came. We conquered! #serendipity3 #familylove #gratitude,” the former Dawson’s Creek star wrote on Instagram next to a photo of their envy-inducing sweets spread. Holmes was recently photographed shooting the upcoming Reelz Channel miniseries The Kennedys: After Camelot in which she plays Jacqueline Kennedy. She previously played the iconic first lady in 2011’s The Kennedys.

“Katie is brave, committed and perfect for this role,” said Reelz CEO Stan E. Hubbard, prior to filming. “She is a strong, talented woman who understands how special and respected Jackie Kennedy, and then Jackie Onassis, was as an international icon.” 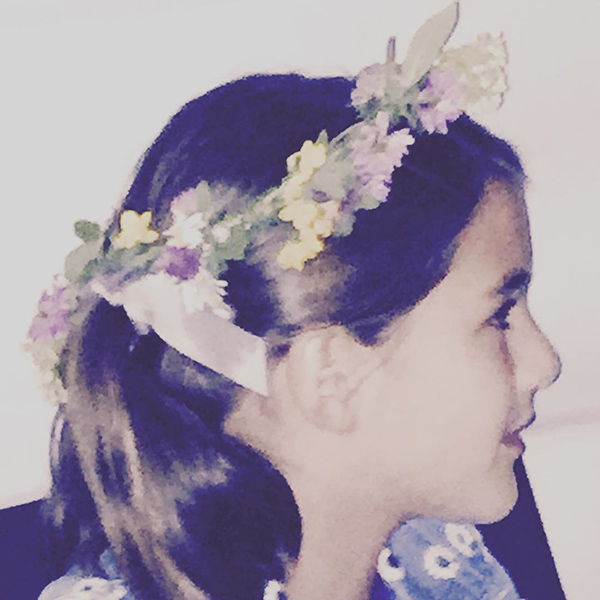 It looks like Suri Cruise and mom Katie Holmes are taking some time off from their directing duties.

On Friday Holmes, 37, took to Instagram to share two photos of Cruise in a flower crown, apparently taken while the two were hanging out on the set of Holmes’ forthcoming REELZ film, The Kennedys: After Camelot.

Accompanying each photo, Holmes posted a string of joyful emoji — hearts and flowers.

This isn’t Holmes’ first photo from the set: Earlier this week she shared a photo of the 10-year-old Cruise with her on set, sitting in a chair that appeared to be labeled with both her name and, beneath it, “Director.”

Celeb Moms Spill: No Mother Is Perfect, and That’s Okay!

But her social media hasn’t been just Cruise-centric: On Friday, Holmes also shared a video of herself on the beach in a bikini, with the caption “Happy weekend.”

Back in April, we reported that Tom Cruise had not seen his daughter Suri in 1,000 days.

Now, he's reportedly inching close to the three-year mark with no apparent plans to break his shameful streak of negligent parenting.

Sources say Cruise justifies his abandonment of Suri through Scientologist directives that require Church members to cut ties with those who have abandoned the faith (known in CoS jargon as "suppressive persons").

Cruise refused all contact with ex-wife Katie Holmes immediately after she left the Church, and sources say he gradually distanced himself from Suri until he reached the point of having zero contact with his with his youngest daughter.

“They used to Skype and text, but that trailed off drastically,” one insider tells In Touch.

“He uses his film commitments as an excuse, but the truth is that doesn’t hold much weight with Suri anymore.”

Many who were formerly close to Cruise speculate that he was eager to remove Holmes from his life, and his relationship with Suri was simply collateral damage.

It seems there was a time when Cruise wanted 10-year-old Suri to be "reformed" by attending a school for Scientologist children.

Not surprisingly, Katie doesn't want her daughter to have anything to do with the Church.

As a result, Scientologist leader David Miscavige reportedly gave Cruise all of the justification that he needed to cut off contact with his daughter.

“He’s disconnected from Katie, and then de facto from Suri, because of her connection to Katie. He hasn’t seen her since she was 7.”

"Miscavige would have hammered home to Tom that Suri has been infiltrated by a bad Thetan,” says former Scientologist and Cruise associate Gary Morehead.

Cruise has yet to respond to claims that he's abandoned he's not longer a part of his daughter's life.

The actress and her daughter Suri Cruise were spotted taking in the Notre Dame vs. Stephen F. Austin collegiate basketball game in Brooklyn on Sunday. The mother-daughter pair were front-and-center at the nail-biting game as Notre Dame’s Rex Pflueger tipped-in the ball with 1.5 seconds left, sending the Fighting Irish to the Sweet 16.

Holmes, 37, dressed in a casual attire sporting a white sweater and pair of jeans while Suri, 9, bundled up in a pink jacket and matching sweater.

Noticeably missing from the mother of one’s left hand was the diamond ring that recently fueled a slew of engagement rumors. (Which Jamie Foxx‘s rep said were untrue.)

Who is Katie Holmes staring daggers at? pic.twitter.com/LroS6BEq6i

Also trending online was Holmes’ fierce game face during the Notre Dame-SFA match.  CBS Sports cameras caught the A-lister scowling as she watched the 6-seed and 14-seed team duke it out.

The Ohio-native has been spending quality family time with Suri in their homebase in New York. Holmes shared a photo on Instagram Sunday writing, “#sundaymorning #familytime #blessed.”