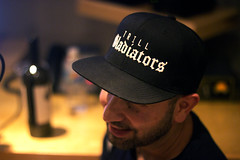 It's a bird! It's a plane! It's a strong female character!

According to sources, Brie Larson is the frontrunner to play Captain Marvel, one of Marvel's most popular female superheroes.

Although they had no comment, insiders say the Room actress is the studio's first choice.

Inside Out's Meg LeFauve and Nicole Perlman are writing the script, while Kevin Feige is producing.

If the 26-year-old gets the part, she will play Carol Danvers, an air force pilot whose DNA gets spliced with that of an alien! Because of this accident, she is super strong and can fly!

Miz Larson will appear next in Kong: Skull Island and Free Fire.

We can't wait for this flick!!

Sarah Michelle Gellar WILL Reprise Her Role In The Cruel Intentions Pilot!

It wouldn't be the same without her!

As we reported earlier this month, Sarah Michelle Gellar was in talks to reprise her role in NBC's Cruel Intentions pilot.

Related: Sarah Michelle Gellar Is Starting Her Own Cooking Website!

It looks like the TV gods have answered our prayers because she is IN FACT going to play Kathryn Merteuil on the small screen!

On Wednesday, SMG confirmed the news on her Instagram!

#throwbackthursday (a bit early in Los Angeles) this picture was taken on the eve of production on the original #cruelintentions. Its me #rogerkumble (director) and #nealmoritz (exec producer) and the other is a picture of us now on the eve of production on the new #cruelintentions. That's right "everybody loves me, and I intend to keep it that way" #kathrynmerteuil is back!!! I am happy to say that I will be joining them (and @nbctv ) on the new #CrueltvA photo posted by Sarah Michelle (@sarahmgellar) on Feb 24, 2016 at 6:03pm PST

Talk about must see TV!

It looks like The Force Awakens will be promoted in the same spirit as the original Star Wars films!

At Disney's D23 convention on Sunday, the first ever poster for the upcoming blockbuster was revealed. Just like the iconic posters from the original trilogy, the new advertisement is painted!

The artwork was created by Drew Struzan, who's classic retro style has been featured in posters for the other films in the Star Wars series -- and even the Indiana Jones films!

While this isn't the primary poster Struzan will make for the film, it still reveals a little bit about the plot!

John Boyega's character, Finn -- seen in the trailer as a rogue storm trooper -- appears to be a Jedi, as we see him holding a blue lightsaber!

Director J.J. Abrams has been pretty silent on the characters of Finn and Rey -- he isn't even revealing their last names because it would give too much away.

Can that mean at least one of them is a Solo or Skywalker? Find out when The Force Awakens hits theaters on December 18!

They Mean Well — But Are Still Irritating AF! The Most Unintentionally Annoying Movie Characters Of All Time!

Fictional characters can be many things -- the hero, the comic relief, the moral compass, even the villain -- but no matter what they should still be likable.

Or at least NOT come across like nails dragging on a chalkboard!

Try not to cringe too hard as we remind you of cinema's most irritating!