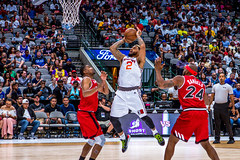 Big3 is a 3-on-3 basketball league founded by hip hop musician and actor Ice Cube and entertainment executive Jeff Kwatinetz. The league consists of twelve teams whose rosters include both former NBA players and international players. Kinter media was commissioned to capture the excitement on behalf of brand sponsor E&J. Photos by Alex Kinter.

Texas Bar Wonders If You’re a Caitlyn or a Bruce Dodie’s Place Cajun Bar & Grill did a bad thing. In order to distinguish the difference between their male and female bathrooms, they used photos. That part isn’t so bad. But the photos they used made things bad.

I get the humor. In fact, I think it’s a cool move and kind of funny. More bars should have giant door photos of men and women to distinguish bathrooms. But remove the wall placards next to the door. It just makes things redundant.

Basically, while using pictures to show who should use which bathroom sounds fun, it’s just a bad idea. Even “Men” and “Women” signs are offensive now because some men identify as women and vice versa. Restaurants should do away with bathrooms to avoid any type of backlash. If you have to go, take your ass home.

Here’s what the bar owner said in a statement on Facebook:

First and foremost, our intention was not to make fun of or offend anyone when we installed the pictures of Bruce and Caitlyn on our bathroom doors. It was merely a lighthearted gesture to push back against the political correctness that seems to have a stranglehold on this country right now. We believe that political correctness has done more to silence rather than encourage important discussions that our society probably needs to have. Based on the mind-boggling feedback, both positive and negative, people are having that discussion. However, name calling and words like transphobic, deviant, racist, homophobic, bigot, etc. serve nothing but to continue to divide us instead of uniting us. After all, we are all part of the same race – the human race. Surely, we can discuss this topic and many others without slapping hurtful labels on each other. Please know that we are here to discuss this and move forward as a community. Everyone is welcome here.

Again, I get the joke and find the idea clever. But saying you’re “pushing back against political correctness” is not the right answer. The right answer was, “It doesn’t matter if you identify as a man or a woman. You are welcome to use our bathrooms.”

This is a sexy Selena Gomez compilation video hope you enjoy!

American model and professional wrestler Brooke
Adams.For people over 18 that want to see her nipples and her naked butt turn off safe search on flickr.